How does impeachment work? 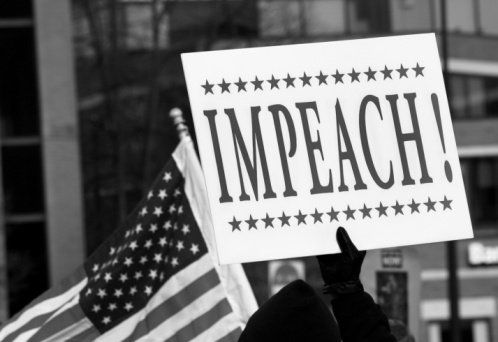 RE:    Impeachment Process and Possible Outcomes

This Memorandum outlines the Impeachment Process and the possibility of Impeachment of President Donald Trump as summarized in “Will Donald Trump be Impeached,” by Nate Silver, published in FiveThirtyEight, May 22, 2017.

The Constitution permits removal of a President before the end of his/her term if enough lawmakers vote that the President committed “treason, bribery, or other high crimes or misdemeanors.”

A majority vote by the House of Representatives is needed with respect to one or more articles of impeachment (i.e., they basically need to indict the President).

The Chief Justice of the Supreme Court oversees a “trial” which is conducted by the Senate.

The role of prosecutors is played by a team of lawmakers from the House which they call “Managers.”  The president has defense lawyers and the Senate would serve as the Jurors.

At least two thirds (2/3rds) of the Senators would need to find the President guilty.  He/she would then be removed and the Vice President (Pence) would take over as President.

There are no set standards or rules in an Impeachment Proceeding.   Impeachment proceedings are more of a political process than a legal one.  The Senate would pass a resolution which would lay out the trial procedures.   However, based on precedents and educated guesses, the following factors will likely need to be considered:

(1)The seriousness of the alleged offenses;

The U.S. Constitution provides:  “The president, vice president and all civil officers of the United State, shall be removed from office on impeachment for, and conviction of, treason, bribery, or other high crimes and misdemeanors.”

It is possible that Trump’s firing of James Comey (Former FBI director) might have constituted obstruction of justice.  At this juncture it is probably premature, but we anxiously await Robert Mueller’s (Special Counsel) findings with respect to his investigation into ties with the Trump Campaign and Russia.

On August 17, 2017, Congressman Steve Cohen (D - Tennessee) and Ranking Member of the House Judiciary Subcommittee on the Constitution and Justice announced that he will also be introducing Articles of Impeachment Against Trump on the basis of Obstruction of Justice, potential violations of the Emoluments Clause and that he is incapable or unwilling to protect Americans from enemies, foreign or domestic stating “Neo-Nazis and the KKK are domestic terrorists” and “[i[f the President can’t recognize the difference between these domestic terrorists and the people who oppose their anti-American attitudes, then he cannot defend us.”

(2) The partisanship of pivotal votes in Congress;

In the House, the average Republican has sided with Trump 97% of the time and the average Democrat 15% of the time.  Democrats have gotten more liberal and Republicans more conservative in there voting patterns.  “Thus, it’s reasonable to infer that because Congress is highly polarized on almost every other issue, it probably also would be polarized on impeachment and removal votes.”  As stated by the author:

- It makes impeachment (but not Trump’s removal from office) more likely if Democrats take over the House in 2019. Partisanship might compel Democrats to impeach Trump even if the political or legal rationale for doing so is dubious.

-Even if all 48 Senate Democrats (including the two independent senators who caucus with the Democrats) voted to remove Trump, they’d also need support from 19 Republicans to get to a two-thirds majority. That would require dipping far into the Republican ranks — well past the few moderates in the Senate — and the decisive 67th vote would have to come from a fairly conservative Republican like Missouri’s Roy Blunt or South Dakota’s John Thune instead. This isn’t going to change much in 2019, even if Democrats have a great midterm election.

The bottom line: Partisanship is the biggest protection that Trump has against impeachment. If you see Republicans start to break with Trump in more substantive ways, such as by launching special committees or holding up his replacement for Comey, he might have more reason for concern. But overall this factor substantially reduces the likelihood of Trump being removed from office.”

As of August 18, 2017, forty percent of Americans polled support impeachment of Trump.

“The bottom line: For the time being, this factor contributes only modestly to the likelihood of Trump being removed from office. Trump is unpopular, but his numbers are not unsalvageable (several presidents have come back from similar ratings to win a second term). A further deterioration in his popularity would imply that he is unpopular even in red states, however, and would greatly increase the risk to Trump.”  Trump’s statements and reactions to the Charlottesville Rally and events thereafter are resulting in him becoming more and more unpopular.

(4)The President’s relationship with Congress;

“The bottom line: For the time being, this factor doesn’t contribute much to the likelihood of Trump being removed from office. But Trump’s history of escalating conflict and failing to respect boundaries could antagonize Congress and contribute to the likelihood of impeachment in the future, especially if the GOP’s agenda is in disrepair. History suggests that Congress takes that stuff personally, and it probably should, since the impeachment process is part of the Constitution’s system of checks and balances.”

(5)Party control of Congress; and

“The bottom line: A Democratic takeover of the House is not quite a prerequisite for Trump’s impeachment and removal, but it would greatly increase the odds. It would also give the Democrats far greater powers to investigate Trump and to subpoena key materials, which could create additional bases for impeachment charges.”

(6)The line of succession.

“The bottom line: If the theory is that you shouldn’t hire a well-qualified understudy because he makes your job more vulnerable, then Trump made a mistake in picking Pence as his running mate. Pence isn’t popular with everyone, but he’s likely to be broadly acceptable to Republicans in the House and Senate, and they’re the ones with impeachment votes.”

Representative Zoe Lofgreen (D - California) introduced Legislation on August 18, 2017 calling for Vice President Mike Pence and the Cabinet to ask for President Trump’s resignation questioning Trump’s mental stability.  She requests that under the 25th Amendment deliberations that they secure medical and psychiatric professionals to examine Trump’s fitness and mental capacity.

1 FiveThirtyEight, sometimes referred to as 538, is a website that focuses on opinion poll analysis, politics, economics, and sports blogging.  In August 2010, the blog became a licensed feature of The New York Times online.

2 Poll conducted August 2 - 8, 2017 by Public Religion Research Institute prior to the violent rally in Charlottesville.  They surveyed 2,024 Americans with a margin error of plus or minus 2.7%.